Back after a long hiatus! Was in Bangalore over the weekend. We decided to skip the five star breakfast on offer and try out the breakfast at some of the more traditional specialty breakfast spots in Bangalore. I wanted to go to MTR (the original at Lalbaug) on one of the 2 days but was vetoed by my cousins who were locals. They recommended two other places.

The first was Brahmins Coffee Shop. This place has grown since the last time I was there (about 15 years back).  It now occupies 3 small shops as against one before and the crowds are the same if not more. One queues up to buy a coupon, collects the food from the counter and stands on the roadside and eats. No chairs, tables or such. One old man with a bucket of chutney is ladling out more for those who require it. 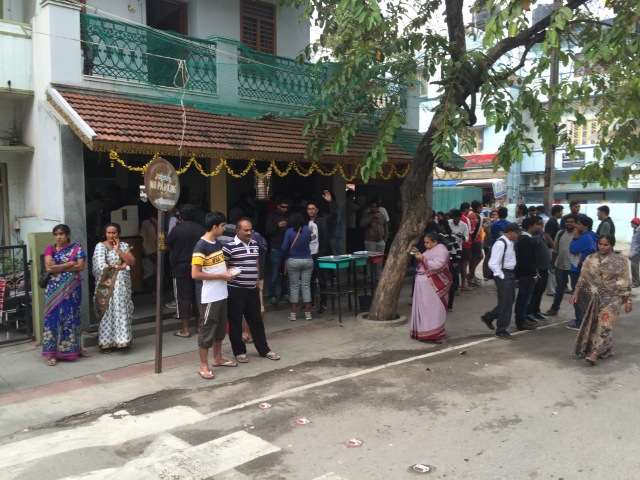 The menu is simple here. Idli, Medhu Wada, Khara bhath and Pineapple Sheera with Coffee to end with. The Idli and Khara bhath optionally come with pats of white butter. The gluttons that we are, it was not optional for us. As an aside, fresh hot steamed idlis deserve a pat of white butter especially in the early mornings! Other than the Pineapple Sheera, which is sweet, the other items come swimming in a pool of chutney. Which can always be topped up by aforementioned old geezer.

The food was exceptional. The Wada was perfection and the Idlis silky smooth. The Khara bhath (sort of a spicy upma), was perfectly flavoured and went well with the butter too! And the liquid chutney complemented things perfectly.

These guys have their operation really in order. Everything seems to run like clockwork. The food is exceptional and consistent. We definitely did not miss that hotel breakfast!

On the second day, i was overruled again for MTR. We took a poll of a few friends at dinner and decided to try the Masala Dosa at Janardhana. This is a sort of canteen where a lot of the local politicos go. And it specialises in Masala Dosa and Sagu Dosa. The only difference between the two is the filling. Masala Dosa has the regular potato onion dosa film while the Sagu dosa has a south Indian style Korma, which is normally served as a breakfast dish with pooris.

The verdict: Good Masala Dosa, but not exceptional. Both CTR (famous for Benne Dosa) and MTR (best Masala Dosas ever) make better dosas. And I could live without tasting the Sagu dosa again.

Great breakfasts in Bangalore. Strongest recommendations for Brahmins and MTR (the original outlet in Lalbaug).